Nikki Sixx, the bassist and key songwriter of Mötley Crüe, has lived a life far more insane and indulgent than you, me, or anyone we know. Here’s a guy who was raised by a single mother and her insolent boyfriend, abandoned by his father, moved all over the continent, and eventually became a petty thief and drug dealer. After learning the bass guitar, he moved to Los Angeles at age 17, joined a band, and soon thereafter started Mötley Crüe with Tommy Lee, Mick Mars, and Vince Neil.

Within a few years, they would rise to the top of the Sunset Strip circuit, and a couple years later, sign with Elektra Records, elevating the band to monstrous success and fame.

Now, imagine being a deadbeat kid from a deadbeat family living on the filthy streets of a deadbeat city and

suddenly becoming an international rock icon of God-like status. All of the sudden, thousands of people worship you; you have more money and women than you know what to do with, and it’s all fueled by a record industry that feeds you whatever you need to keep it going so that they can suck your life dry like the vultures they are. Yeah, your life would be a mess too.

Sixx’s life turned into such a cocaine- and heroin-filled saga that his excesses eventually killed him — was declared dead after an overdose, but was revived by two adrenaline shots to the heart. After this, he cleaned up through rehab, and went on to produce Mötley Crüe’s most successful album, Dr. Feelgood. 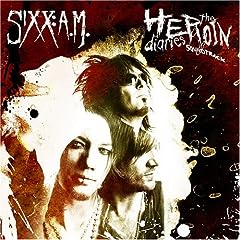 The Heroin Diaries, written by Sixx’s new band Sixx A.M. is the story about the crippling drug addictions that Sixx suffered through, and his heroic return to sobriety. It is the soundtrack to the soon-to-be released autobiography with the same title. The album is an outpour of feeling from the heart, and is one of the finest concept albums I’ve heard in the past few years.

The album starts with an introductory monologue in the song titled X-Mas In Hell:

December 25, 1986. Van Nuys. Merry Christmas. Well that’s what people say at Christmas, right? Except for normally they have somebody to say it to. They have friends and family, and they haven’t been crouched naked under a Christmas tree with a needle in their arm like an insane person in a mansion in Van Nuys. They’re not out of their minds, they’re not writing in a diary, and they’re definitely not watching their holiday spirit coagulate in a spoon.

I didn’t speak to a single person today. I thought, “Why should I ruin their fucking Christmas?”

I’ve started a new diary and this time I have a feeew new reasons. One, I have no friends left. Two, so I can read back and remember what I did the day before. And three, so if I die, at least I leave a nice little suicide note of my life. It’s just you and me diary, welcome to my fucking life.

The album looks back on life, and takes you through the highs, the lows (“X-Mas in Hell”, “Intermission”), and the dramatic resurgence of life in the song “Girl With Golden Eyes”, where Sixx catalogues the day-by-day withdrawal and recovery in rehab. He then goes through the post-recovery steps of apologizing in “Permission”, and relives hope of the future in “Life After Death.” Most important is the hit song “Life is Beautiful”, in which Sixx looks back and pleads to “Just open your eyes and see that life is beautiful”.

Sixx really put himself out there in this one. He lived excessively, he learned too slowly, but he (barely) made it out alive and was able to turn it all into a chilling story for everyone to understand and enjoy.

The Heroin Diaries (album) can be sampled and purchased here, and the book can be found here.