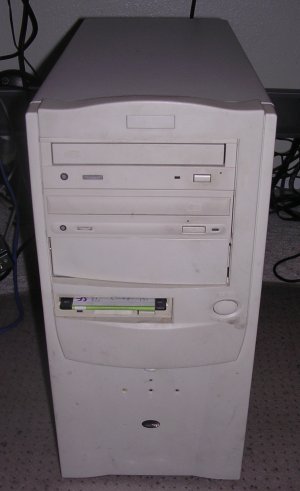 On December 31, 2006, I was setting up my new bedroom, which also serves as my office, design studio, and, of course, surfboard storage room. I turned on my computer, which was so creatively named “berto”, and noticed the power supply fan struggling to do its job.

Like any other idiot electrical engineer from Ohio State would have done, I decided to test if the fan was spinning by inserting a metal screwdriver into the power supply, thereby electrocuting myself with 120V and creating a small explosion.

And that was it. Berto had died. And this post is dedicated to the death of that 7 year old[1] dear friend of mine.

You are now attending berto’s funeral, and I am begrudgingly giving you his eulogy right now.

Berto was born on December 27, 1999. Hours of preparation went into his creation. This was my first computer being built from scratch, and would be used to forge my new life in college, as well as help me accomplish work for the beloved but now-defunct APK Net (sold to Expedient).

Berto was paid for in half by myself, and half by my parents. He cost $2600 total.

Over the course of time, I upgraded the memory to a whopping 396MB, and got a new hard drive that took me to the maximum supported 80GB, got a new power supply, and melted quite a few video cards due to poor cooling and dusty dorms.

I learned a lot about that purchase over time. Some quick lessons are: 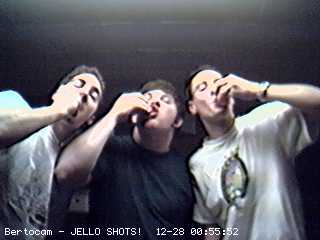 berto and I had some great memories. They began during construction, and ended with destruction. In between, there were those LAN parties at Larz’s house, CFabe’s house (don’t forget about jello shots with TGould and CFabe!), Arstein’s house, and TGould’s house. Yes, we were dorks, and it was fun.

Bertocam, pictured above, was around for a while, hosted using berto’s Apache server. I have a ton of silly pictures from freshman year, back before digital cameras were hot. 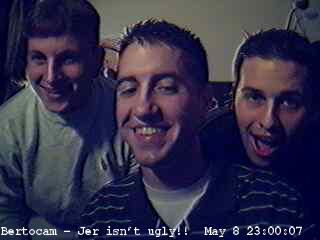 In college, berto became more popular than I did for quite a while. You see, berto’s administrator decided to leave sharing wide open on the campus network, and quickly became a hub for pornography trade. Despite being warned by a friend to turn on password protection, my ethernet connection was constantly pegged at 10MBits. 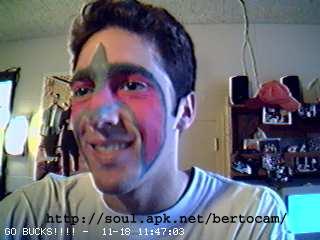 berto was a trooper. Pegged network connections. Silly websites. Traveled all over northeast Ohio. Put up with numerous idiotic kernel panics and botched experiments. He lived in 6 different locations with me, and nearly survived the 7th. That’s impressive.

berto saved the day numerous times with remote desktop capabilities in Linux. His usage as a webserver for the early renditions of bertopics.com and bertoline, as well as that of a MySQL and file server were monumental.

berto took care of me, and I took care of him. He was constantly playing me music, checking emails, and surfing the web. I was constantly keeping him alive and hooking him up to weird things, such as a remote control for my mp3 player, which I would now be miserable without. He has seen some great changes in technology, and even greater changes in his owner.

And now, he’s gone forever, off to the PC heavens, where he will reign supreme over those who he lasted thrice the length.

I love and miss you, berto, and I will hold you near and dear to my heart forever.

However, it is time to move on. In part two of the new computer series, we will discuss the birth of ‘destroyal’, the latest and greatest in MikeRoberto.com technology.

Posted in Life, The Universe, and Everything, Technology by Berto.