I’m not a TV guy, but Friday Night Lights has sucked me in. This action/drama show starring football-addicted small-town Texas has been stealing my Tuesday nights. Since it’s filmed right here in Austin, I have taken extra interest in this rapidly-degrading series.

The pilot of Friday Night Lights was incredible and had me within minutes. It was edgy, had lots of football action, and a good storyline. However, it was also predictable right from the start. 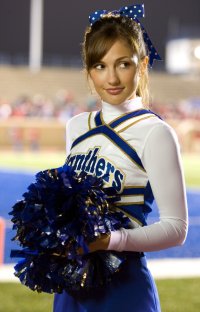 Obviously, this show is about high school kids, so it’s going to have every stereotype possible. The story focuses on two quarterbacks – the good one, and the backup. It didn’t take a whole lot of brains realize that this #1 QB was going to get his head blown off somewhere, and soon.

And so began the stereotypes and predictability, and they haven’t stopped since. So let’s quickly go through this show in all of its lameness:

The show stars all the stereotypes:

So not only is this shit getting awfully lame, but at this point, they’re no longer showing any football! All the good parts of the show are gone, and have been replaced by the OC season 2.

At around #7, I begin hearing complaints from my good friend Lon, who was also suckered in by the pilot.

But we’ll just keep on watching, because after all, it’s not action, it’s drama — and I’m freakin hooked.

Posted in TV by Berto.