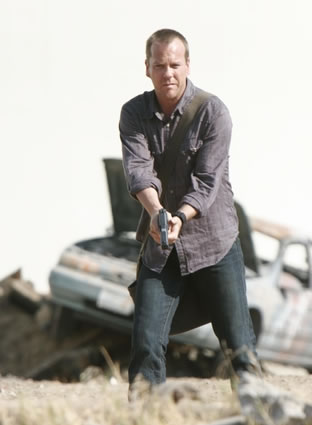 After 7 months of waiting, the first two installments of Fox’s hit series “24” will finally be released to the world tonight. Due to my devastating good looks and personality, I have already made connections rather high up in Hollywood, and have secured the first four episodes of the thrilling action series.

Led by Jack Bauer and our friends at the Los Angeles CTU (Counter-Terrorist Unit) must again fight our Middle-Eastern pals who find it more important to destroy all of America rather than to lead meaningful and happy lives. We find out through the previews that Jack has been exchanged back to the United States by the Republic of China. Terrorists who have taken the country under a siege of suicide bombing attacks are demanding Jack be sacrificed in order to obtain critical information to stop the attacks.

I will not give away any details to the shows. Normally, it really wouldn’t matter because 24 has become so formulaic that you could predict everything from the start. For instance, let’s recap some of the formula: 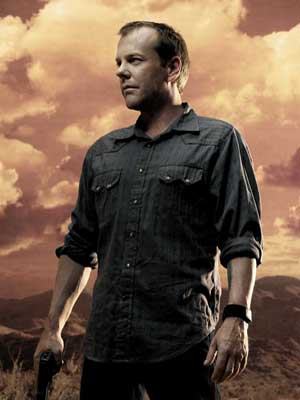 I’m not complaining though, because the formula is a good one, the action is great, and Kiefer Sutherland is incredible. It’s post-911 action/drama and I love it.

Moving on to this season, you can already tell that you will see some of the above formulaic traits. However, I’ll tell you this – this is NOT going to be your typical 24 season. If you think the show jumped the shark after its outlandish 5th season, then come on back aboard, because this one looks intense, and above all else, different.

Jack is different, as he’s been through a lot in China. The leadership is different, having learned from old mistakes and having a new President. The enemy is different, because there are multiple fronts. And finally, Chloe is different – she just looks hotter and is losing her charismatic attitude.

(i.e. he actually doesn’t beat the ever-living shit out of someone in one altercation, but don’t worry, that person will still die).

These new twists, along with others, make 24 extremely promising. Watch the first four episodes and tell me you aren’t absolutely hooked. Because I am, and now I have to wait a month to see any more.

Enjoy, and Rest In Peace Edgar (Seasons 2-5, pictured above) -berto

Posted in TV by Berto.