In England, there lives a man who writes, performs, and produces some of the most beautiful music in this world. And practically nobody will ever even hear it.

That man’s name is Steven Wilson.

Heavily influenced by Pink Floyd, Wilson has been producing music for over 20 years. His most popular works are with Porcupine Tree, Wilson’s progressive rock band. Porcupine Tree’s latest albums have come under more influence from the realm of metal; his blending of the two genres is wonderfully unique.

Despite my love for Porcupine Tree, I prefer Wilson’s side-project, Blackfield. In Blackfield, Wilson teams up with Aviv Geffen to create a more pop-oriented style of progressive music, and the tandem’s chemistry is immediately addictive.

Before I continue, I’d like you to go to my MySpace page and listen to the Blackfield MP3 on the playlist (it is currently on the top on auto-play). This is the intro song to Blackfield II.

In February of 2007, Blackfield will release their second album, Blackfield II, three years after their original self-titled album. After just a few listens to this 42 minute long masterpiece, I can already guarantee that this will be in the Top 5 of 2007.

While I was in high school, I listened to a lot of Swedish death metal (I still do). But my brother once asked me, “What do you listen to when you want to chill out?” It took me nearly a decade to find the respond to that question, Nick, and the answer is Blackfield.

Blackfield II might have a bit of pop in it, but the underlying tones are melodically depressing. Wilson’s time-tested methodologies of contemplation and evaluation conjure fantastic mood music. However dark the album may get, though, I cannot allow Blackfield to do anything but make me happier. I find it greatly satisfying knowing that there’s music so atmospherically beautiful out there, and that I have discovered it, never to let it go. (Note: on the left is an image of the cover of the original Blackfield album)

The album gets better and better with every listen. At times I feel that I have disserviced Blackfield by putting the track “Once” all alone on my MySpace playlist. This album can’t be broken down into songs – one of Wilson’s greatest strengths is his ability to make an entire album flow together as if it’s one epic song, only to shift like subtle changes of seasons. 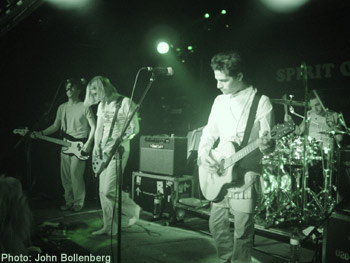 The blend of smooth vocals, electric guitars, and keyboards provide a great foundation for a rollercoaster of an album. Every song has its ups and downs, and I find it impossible to get bored with it. I do, however, get lost in this album in ways that I don’t experience too often. Before I know it, I’ve been sitting here for 42 minutes doing absolutely nothing and the only thing I can remember is that I was listening to some really damned good music.

Whether you’re a metalhead looking for an afternoon chill album or a mellow user of psychedelic drugs, I urge you to listen as well. The album will be available in the states in March of 2007, and in Europe in February. It can be found here at amazon.com, and be sure to check out the video preview of Blackfield II on blackfield.org.