On this fateful, yet somewhat expected night, I have decided to make public something that I have been preaching to close friends for the past couple of years. A prediction so unbelievably earth-shattering that it must be documented immediately, thus leaving out any question of its founding. Ladies and gentlemen, I bring to you The 2008 Cleveland Prophecy: All three major Cleveland sports teams will win their respective championships within the same year.

If you don’t want to get depressed, skip down to the prophecy section. 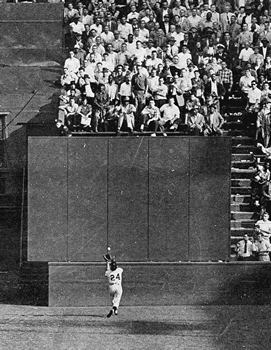 We have all seen the disastrous meltdowns that have ripped the hearts from Cleveland sports fans and bashed them to a pulp on the cold, rusted ground. While I was taught by my mother at a very young age that the Curse of Rocky Colavito was the beginning of the longest stretch of humiliation and despair professional sports would ever bring to one city, it actually started before that. Meet the 1899 Cleveland Spiders, the team that somehow found a way to go 20-134 — only 84 games behind first place. Over half a century later, during the 1954 World Series, Willie Mays made The Catch, which stunned Cleveland fans during a time of great prosperity.

Despite winning the 1964 NFL Championship, which would be the last glimmer of hope for decades to come, the Curse of Rocky Colavito was finally in full effect. Were I to travel back in time to this point, my only comment would be “it only gets worse from here”. But I’d be wrong, because it only gets a lot worse.

Not a whole lot of winning occurred until Ten Cent Beer Night in 1974, in which the Indians mounted a comeback against the Texas Rangers, yet had to forfeit the game due to the uncontrollable debauchery that typically ensues after spending $2.00 to drink 20 Budweisers. Back to losing we go…

In January of 1981, Red Right 88 put Oakland in the Super Bowl and the Browns in the dumpster.

But then there’s our favorite — The Drive. John Elway’s 98-yard comeback during the 1986 AFC Championship (January 1987) guaranteed us that we were on to something special – losing was in our blood at this point, and it would not be cleaned anytime soon. This day, however, is special to me because it is my first memory as a Cleveland Browns fan. I remember the mayhem that occurred at my neighbors home across the street from us. The women – one trashy next-door-neighbor, in particular – were going absolutely ape-shit. Me and the other 5-year olds who didn’t understand what was going on feared for our lives. What do you do when the people who have been protecting you all your life are no longer in control? Who will protect the protectors? This nuclear meltdown is forever scarred in my memory, and it has helped make me the Cleveland sports fan that I am now.

It only took another year for more of the same. In January of 1988, The Fumble went down, where Bernie Kosar’s four 2nd-half touchdowns would be negated by Earnest Byner’s fumble on the Denver 3-yard-line. 1987 stabbed you in the heart, 1988 twisted the blade.

We weren’t beat down enough, so Michael Jordan decided to join the party. 16 months after The Fumble, MJ nailed The Shot over poor Craig Ehlo, which I’m sure you’ve seen on hundreds of Gatorade commercials.

Next up – Art Modell and Al Lerner tear the soul from the city and move the Cleveland Browns to Baltimore, who of course go on to win the Super Bowl. I will not debate who is at fault for this move, as far as I’m concerned, everyone is, but it goes without saying that 1996-1998 sucked in Cleveland…

…especially on that fateful World Series Game 7 in 1997. Unbelievable.

In between all of these time gaps, every other Cleveland team is losing their asses off. That is, until 2007, when the Cleveland Cavs bring championship basketball back to the Heart of Rock and Roll, but lose to a superior San Antonio Spurs.

So this brings me back to the 2008 Cleveland Prophecy.

Things began looking up a few years back – Lebron James on the Cavs. Hafner, Sabathia, and Sizemore on the Indians. Phil Savage to return the Browns back to glory. And slowly, the pieces are truly coming together.

The Cavs need just one or two more skilled players for Lebron to play along with, as well as the hopeful development of Daniel Gibson. GM Danny Ferry has ONE offseason to get it together – the Cavs will have to be the first to win in 2008.

The Indians are on the right track, but relief pitching needs to be addressed. Will owner Larry Dolan open his little checkbook and get someone? If so, 2008 is ours. Hell, we don’t look so bad in 2007!

And then there’s the Browns. The disgrace of modern Cleveland sports. With a great 2007 draft, we are out of excuses. For the first time I can ever remember, we are going to have an offensive line. The defense might actually be good if the offense can get a first down every now and then. And best of all, the NFL has the most parity of any pro sports league. Losers not unlike us can become winners quite quickly in the NFL, and we have 2 seasons to somehow find a way to do it.