The information on this page and in the video below is not to be taken as medical advice, and neither participant is a doctor or oncologist.

You must speak to your doctor and receive written approval when beginning any new diet and/or supplementation program, and we take no responsibility for the opinions, evidence, or alternative adjunct strategies stated herein.

No diet or supplementation program should ever be used as a replacement for sound medical treatment, which should be followed under the care of your medical specialist.

Statements on this page and in the associated interview have not been approved by the FDA.

Continue at your own risk.

A year after helping us Optimize Brain Performance, Shawn Wells returns to the PricePlow Podcast for a very informative interview, especially for those considering some adjunct therapy or last-ditch efforts when all others have failed.

It’s best to watch the video yourself, and we’ll have plenty of links below. Note that the video is long, and also gets into the entire “state of the situation” after we’re done talking about cancer specifically:

A ton of this entire discussion centers around the answer to this ultra-important question, however:

Is cancer a metabolic disorder?

Before proceeding any further down this path, the first question one has to ask themselves is if they believe the “Cancer is a Metabolic Disorder” theory.

The best and most convincing video to watch on the subject is by Dr. Thomas Seyfried, titled “Cancer: A Metabolic Disease With Metabolic Solutions”. It is embedded below:

More recently, Dr. Seyfried has published a paper titled Press-pulse: a novel therapeutic strategy for the metabolic management of cancer that I brought up in the podcast with Shawn.

If you believe that metabolic disorders caused by diet may be the most pressing cause of the proliferation of cancer (as Shawn states in the video, he believes it is 90% of the time), then there are ways to attack this potential root cause alongside an oncologist’s prescribed therapy.

As mentioned in the interview above, Shawn had very little time to assist with someone’s terminal condition. This is the entirety of what he suggested (the suggestions start at the 25:00 mark in our interview above):

There may be more, but alongside a doctor’s therapy, the above list is the exhaustive supplemental and dietary attack on mitochondrial disorders, which could include brain cancer and glioblastoma if you are on the same page as Dr. Thomas Seyfried.

Regarding the High Blood Sugar and Dementia Connection

In the interview at roughly the 17-minute mark, I mention how high HbA1c levels have been strongly correlated with dementia, which we covered previously on this blog. The evidence gets stronger and stronger for people who claim Alzheimer’s (and similar neurodegenerative diseases) to be “Type-3 Diabetes”. 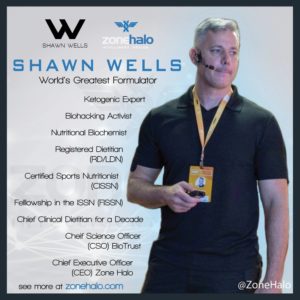 Shawn Wells (@ZoneHalo) is a wealth of information!

Shawn Wells, who is known as ZoneHalo on social media (links are below), is a research scientist with a massive knowledge-base in the nutrition and supplementation fields. Shawn earned his Master’s Degree in Nutritional Biochemistry at UNC-Chapel Hill, and also received a minor in Exercise Science.

Shawn’s also a Registered Dietitian and Certified Sport Nutritionist (CISSN). He has over a decade in nursing care, making it all the way to a role as Chief Clinical Dietitian. He now runs Zone Halo Research and is also the Chief Science Officer (CSO) at BioTRUST Nutrition, where he runs R&D, Quality Control, and the Regulatory departments.

Before that, Shawn was Director of R&D at Dymatize Nutrition, which is now owned by Post Holdings.

Watch the video on our Optimizing Brain Performance with Shawn Wells

You can also head over to ZoneHalo.com.