Research Confirms it: The “Sugar Coma” is REAL! But When is it Worst?

The sugar coma is real. 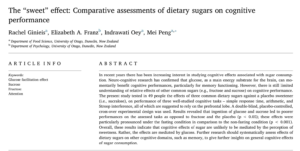 Hot off the Press! The “sweet” effect: Comparative assessments of dietary sugars on cognitive performance

Sugar and caffeine are a match made in heaven for corporations like Monster Energy. For years now, energy drinks have combined sugar and caffeine. Consumers down the drinks and crave even more, which allows the companies to rake in massive profits. These products promise heightened performance, more energy, and even an improved life. However, many followers of carbohydrate-heavy diets also experience sluggishness or decreased motivation after all their glucose-laden foods… otherwise known as the sugar coma.

And now a study is proving that it’s not just a joke.

Why This Study is Particularly Interesting… control.

A primary concern of people involved in diet sciences is control. People are laughably bad at reporting their daily caloric intake. Studies that don’t control caloric intake or content become confounded by this intrinsic error.

For instance, a BBC documentary focused on obese-women assumed that a participant was eating about 1100kcal. Upon finding no weight loss, investigators realized she was consuming close to 3000kcals a day![2] 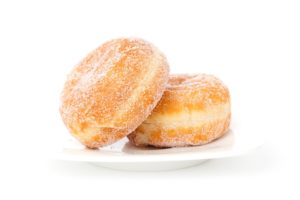 Eight pairs of donuts is totally under 1100kcals, right?

But this study we’re about to discuss is different. Each participant received a sample that was modeled to taste exactly the same — except it wasn’t the same carb. The study focuses on comparing fructose, sucrose, and glucose to a non-caloric sweetener, sucralose. Note that sucrose is simply table sugar. Also note that sucralose is the sweetener that’s used in Splenda brand (the yellow packet) and a TON of pre-workouts.

Participants consumed the carbs as a liquid (with some zero-calorie lemon-flavoring), and each data-collection session took place at the same time of day for each trial. The extreme control the investigators used means that the data produced is less confounded than other investigations, so it’s more reliable and something to take seriously.

It was also a long study. Studies measuring body composition, training styles, or diets are usually eight or ten weeks long. This study went on for sixteen weeks![1]

Each session lasted an hour. The investigators relied on three different computerized tasks to measure overall cognition. They were interested in information processing, executive function, and attenuation. The order of tests remained constant across participants, and they had a minute between tasks. To make sure participants understood the ask, instructors used both verbal and written instructions. These investigators really hate confounded variables it seems, because they did a great job designing this study.

How the “Sugar Coma: Sweet Effect Experiment” was run each time

The researchers also used an ingenious trick for this investigation. They gave the tests to the participants twenty minutes after consuming the carbohydrates (or placebo) concoction. This trick ensures that glucose spiked in groups given the carbohydrate drink.

The researchers used a finger-prick measurement of blood glucose on a non-dominant hand. All the data got analyzed via ANOVA.[1]

Of the 49 participants measured, investigators found a link between glucose and sucrose consumption with poorer performance on all three cognitive tasks. Interestingly enough, fructose and sucralose (an artificial sweetener) did not seem to lead to poor performance. The p-value, a tool used to ensure that results are not due to random chance, suggest that this data is statistically significant and meaningful.

Here is just one example of their findings. Maybe driving after a glucose-heavy meal isn’t the smartest idea… 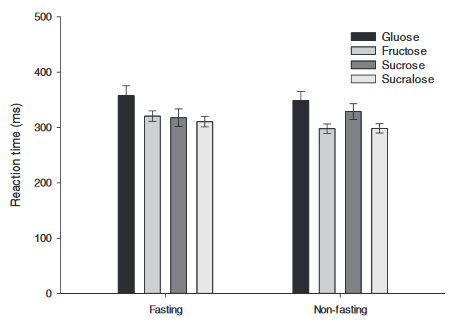 In reaction time measurements, a higher bar is bad. Don’t say we never taught you anything.

The investigators concluded that this effect is likely not due to the sweetness perception. The effects seem to rely on glucose consumption alone. This assumption relies on recent neuroimaging data showing that caloric and non-caloric sweeteners seem to activate different brain regions.[3,4]

Take note, video gamers. In the chart above, look how much worse the reaction times were for the glucose and sucrose groups! Maybe it’s time to re-think that sucrose-laden energy drink or soda…

Fructose kept pace with placebo… with a caveat!

As mentioned above, one of the surprising bits of information here is that fructose did not yield the same cognitive slowness as glucose and sucrose!

Bananas, the ultimate nootropic? Probably not… but carb-lovers should know that fruit-based are likely best for these types of cognition tests over straigth sucrose/glucose in beverages

The researchers consider this as a reason:

Fructose does not traverse the blood-brain barrier and is instead metabolised through the liver[5], resulting in a much slower increase in blood glucose levels.[1]

However, looking deeper, the researchers may have slanted the study in favor of fructose:

This is a sign to read deeply into investigations. The study claimed that each participant received roughly equivalent amount of carbohydrates. Upon looking at the actual numbers, it’s blatant to see that this is not the case at all.

They did it for the taste equivalency

The researchers explain the energy variations themselves:

As a caveat of the present study, the testing samples varied in energy content. Thus, the glycaemic responses were expectedly variable….

The present study adopted a rigorous protocol to ensure equivalent sweetness across the tested samples, which should be recommended for future research in this area. This method is particularly useful given that exclusive activation of taste receptors by non-caloric sweeteners can predict some insulin changes.[6][1]

Basically, they made the drinks all taste as close together as possible, so that the participants wouldn’t start to “know” what they were given. 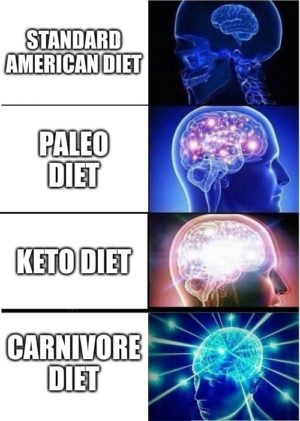 Enlighten your brain… by removing the sugars! Only *one* diet focuses on true blood glucose control. The rest can still lead you with too much circulating blood sugar.

But given that 14.5g sucrose and 13g fructose have a very similar amount of calories, yet sucrose did far worse, lends to the notion that sugar will generally performs worse than fructose in cognitive tasks like this — unless there’s something “weird” that happens once you get over the 14g threshold, which seems very unlikely.

Another question for a future study by the researchers would be to see what would happen if the same, higher amount of fructose were given… or if you’d lower the glucose to 13g… but at this point, we can be confident that drinking at least 26g of glucose or 14.5g of sucrose most certainly isn’t a good thing if you’re looking for some quick focus or improvements in reaction time.

Point being, 13g of fructose didn’t diminish cognitive abilities, so this might be a sign for those who are drinking juice in the morning for a bit of energy, as opposed to soda. Realize, of course, that 13g is what you’d get in half of a cup.

And needless to say, the dangers of adding more body fat with fructose-laden juices, are still there, and we’re not confident it’s worth breaking your fast of 13g of sugar that won’t diminish cognitive tasks.

This brings us to our next point:

Looking back, this study was definitely not great for the “Leangains” crowd, or those who utilize daily intermittent fasting on a 16/8 schedule (16 hours of fasting with an 8 hour open eating window).

The researchers found that a meal comprising caloric sweeteners seemed to worsen cognitive performance even more than the non-fasting groups. For those that rely on an intermittent fasting diet like Leangains, it might be prudent to complete demanding tasks during your fast! Thankfully, those that cycle carbohydrates on rest days won’t feel this effect on their days off from the gym.[1]

Leangains is a popular intermittent fasting protocol that adheres to a 16 hour fast combined with an eight hour eating window. Championed by Martin Berkhan, it also encourages followers to consume lower carbohydrates on rest days.

Not surprising to those who have fasted a lot

Anyone who’s done this on the keto diet may have already seen it in action. This is anecdotal, but for many of us, cognitive focus is vastly better while in the fasted state in the morning, perhaps even with some MCTs added to your coffee.

However, once the fast is broken with either carbs (or even too much protein)… “something happens” and the ultra-pure focus diminishes.

This study shows what many of us already know: those of us who live the low-carb lifestyle are more drastically impacted by carbs than those who are used to shoveling carbs into their mouths on a consistent basis! The mental atrophy is simply worse when you’re not used to it!

What this means is that if you’re going to go in on low-carb, you need to adhere to it seriously, lest you face these types of consequences. Cheat meals are good, but don’t make those cheat meals at important mental times, like before that test or presentation. The good news is that low-carb diets have better adherence, as we’ll show in future articles.

What we need next:

Note: This article was originally published on the PricePlow Blog I’ve moved diet-related content to my personal site here.

There is one caveat with this study. The testing samples varied in daily energy intake. The glycemic responses due to the drink are likely confounded by what the participants ate the previous night or prior to the study itself. However, this may be less of an issue than we think. The researchers concluded that the caloric average of meals in the non-fasting group rested between 200-300kcals on average. In our opinion, a maximum difference of 100kcals is just not enough to dismiss these results.

However, it’s still important that future studies take into account global energy levels. This will ensure that science that follows this landmark study solidifies the evidence presented by this paper.

Finally, we’d like to see each of these drinks have the same amount of carbohydrates — even if that involves some drinks being sweeter than others (which could add a confound, as the researchers suggest above). It would be a good side-study to have handy to see if 26g fructose really does behave better in this sense than 26g glucose or sucrose, for instance.

In my opinion, this article is the tip of the iceberg. While it has a flaw due to lacking iso-caloric measurements, it provides startling information that will inspire future investigations in the year to come. We’re excited to see the flame this study will spark in cognition-based investigations.

More evidence is coming that a fasting state — especially one in ketosis — may have some fantastic cognitive-boosting qualities (and anti-neurodegenerative ones too). Now we’re seeing the other side of the coin: that drinking sugars may knock your test score down quicker than you’d think!