Mice Live Better and Longer on the Keto Diet, But Will You? …and Do You Care? 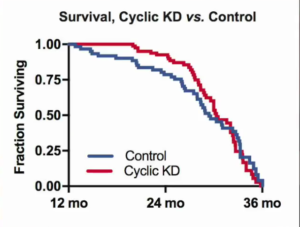 The cyclic keto diet didn’t improve longevity for all mice, but it sure made a significant number of them die later into middle age, and fewer die early. This warrants serious investigation in humans.

But should we care?

Our review of this data centers on two investigations. The first by John Newman and Eric Verdin et al. had amazing results — Newman and his team found that high-fat diets could offer several benefits:

Mice that stuck to a cyclic keto diet had improved memory compared to base-populations on an ordinary diet. Better yet, the mice also had better overall health markers. They had a down-regulation in the genes responsible for insulin, protein, and fatty acid formation.

The team attributed the benefits of these keto-diets to an up-regulation in a series of genes referred to as PPARα. This up-regulation was consistent throughout the cells of the mice and maintained in their old age.[1]

Note: This article was originally published on the PricePlow Blog but I’ve moved diet-related content to my personal site here.

But why did they go with the cyclic keto diet? When they were researching and developing the study, they realized that mice loved the high-fat moderate-protein zero-carb diet so much that they would not stop eating if given to them ad libitum. Both the high-fat and ketogenic diets were “obesogenic”, as the study put it. This is not what most humans experience, but the mice had a feast of it.

So in order to “solve” that problem, they used a cyclic keto diet, cycling between carbs and no carbs, and were able to run the study as planned.

The results of this one were that it reduced mid-life mortality, but at the end of the day, the mice had basically a standard lifespan given to the control diet, although with the better health markers throughout. 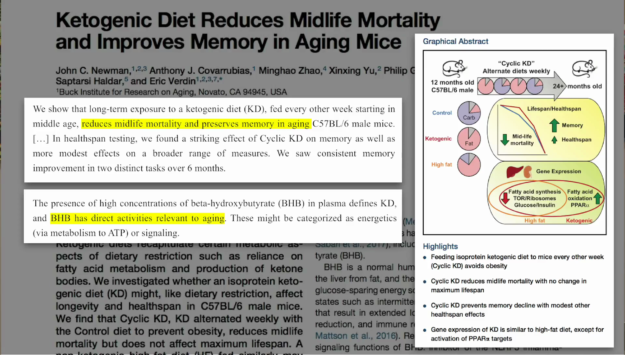 They all died in the end… but the mid-life area was where the cyclic keto diet really separated itself from the control / Western diet.

A similar investigation led by Megan Roberts et al. had results that seem to confirm what Newman found, but with a fixed calorie, pure ketogenic diet (no cycling). 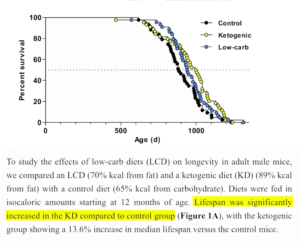 The pure keto diet also had more mice living far deeper into life… but check out that one low-carb outlier!

Dr. Rhonda Patrick (@FoundMyFitness) goes into depth on these studies, and far more, with one of the researchers in the first paper, Dr. Eric Verdin:

The discussion on these studies begins around the 9-minute mark. 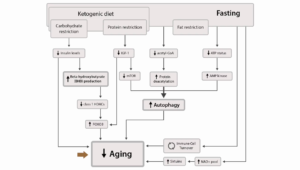 How the Keto Diet and Fasting Affects Aging

Okay, okay. So ketogenic diets make your pet mouse live way longer. Sounds great. Let’s all eat bacon all day and America’s health woes disappear. Roberts and Newman’s teams wave to NYC from a parade float in thanks of saving the world.

Not so fast. Humans aren’t mice… but we’re damn similar. Rats and mice have been the cornerstone of psychology and neuroscience ever since the days of Francis Beach. Human and mouse brains are very similar ways. One such difference is that rat’s have a huge olfactory bulb that makes comparing the sense of smell complicated across species.

However, mice and humans have more considerable differences in metabolism and digestion. Mice are much smaller and have lower global energy demands. So, for diet investigations, studies on mice can be dubious.[3]

So let’s go back to those two studies. Both investigations found health benefits. Gene expression rates shifted in positive directions for mice on low-carb diets. In other words, bad genes weren’t translated as often. Should we think this will occur in humans as well? Maybe. Maybe not. A scientifically literate person must take the systematic differences between species into account and demand more.

In the experiment, the cyclic ketogenic diet improved nearly every mental marker – and the mice started the keto diet 1/3 of the way into their lives!

However, the improved memory thing is something to take seriously. Human and mouse brains are similar, especially in terms of memory. Should we consider using ketogenic diets for mental performance? It’s absolutely promising. Going back to the systemic differences argument shows it might be time to have faith in this aspect of ketogenic diets. Our brains are similar enough where something like an improved memory may translate well across species.

What should we take from these findings?

The torturously hilarious part of science is that each investigation creates a demand for new investigations. Findings must be replicated. Explanations must be found. Mechanisms are discovered and debated.

It may not let you live longer, but it will make you live better as you age.

This is especially true in situations where findings may be dubious, like the improved digestion-related markers in mice. Before we can say “keto may impact gene expression positively”, studies investigating the same in humans must occur. More studies in mouse populations would also help cement this finding.

From this data, we take that keto diets are being investigated and growing wildly for a reason. The findings have unveiled a potential gold-mine of benefits for people that follow low-carbohydrate diets. Imagine if we can help people with neurodegenerative disorders just by telling them to eat bacon and eggs instead of cereal for breakfast, and/or to adopt a time-restricted eating window (ie intermittent fasting). An easy sale for an improved life. 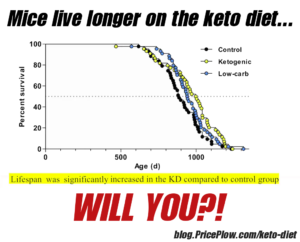 Three questions: 1. Will you live longer? 2. Will it be better quality living? and 3. Do you even want to live that long?

We’re already confident that caloric restriction likely leads to a longer life.[4] But it’s up to to decide if you really want to live longer, or if you want to live healthier – these two studies explored both in mice. Lifespan does not mean everything — especially if it is not a quality of life. After all, who wants to spend a decade being miserably sick?

We’ve recently seen the life expectancy in America drop for the first time in a long time (mostly due to the disastrous opiate crisis, which cuts lives extremely short).[5] But outside of that, most deaths occur due to metabolic syndrome. For some portion of the general public — we’re still not sure what percentage — a carb-restricted and possibly even keto diet can stop that trend.

But for now, PricePlow is taking the angle that ketogenic diets may add life to years, but maybe not years to life. It may not let you live longer, but it will make you live better as you age.