Jillian Michaels is a “Diet Disinformation Agent”. But We Can Save Her.

By now, if you follow the low carb community online, you’ve likely seen the video that Jillian Michaels put together on the Big Think YouTube channel. Or even more likely, you’ve seen the responses to her video, since those responses have far more views than hers.

Many of those videos attack, criticize, and even belittle Jillian’s intelligence. But not this one. I could sit here and cite boring studies and talk about biological pathways until I’m blue in the face, but others who are smarter than I have already done that.

So instead, I’m going to explain to you what I think is really happening, and then extend an olive branch to Jillian.

You see, in our household, despite our nutritional disagreements with her, we’re Jillian Michaels fans. My wife loves her workout DVDs and will continue to do so. I’ve occasionally done them with her and quite frankly I like her training style. So Jillian, here is some tough love from the Roberto household in Texas.

Folks, Jillian is what you call a paid “disinformation agent”, sometimes known as a “disinfo agent”. A disinformation agent is someone of public respect who is typically pushing the agenda of “the establishment”, be it big-food, big-pharma, big-agriculture, or certain political entities.

They’re there to muddy the waters of anyone looking to find a certain truth. They’re sometimes also known as “gatekeepers”, but in this situation, I don’t consider Jillian to be a gatekeeper because the low-carb / high-fat and ketogenic lifestyles are far beyond the control of being “gatekept” by the establishment. The floodgates are long busted on it.

So the next best thing the establishment — who is set to lose a lot of money, power, and influence as people get off of their chemicals — can do in the wake of this revolution is it to massively confuse the situation and add a lot of bad noise to the signal. This is the “Brave New World” side of the “1984 vs. Brave New World” debate. 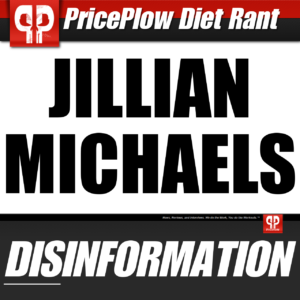 Is Jillian Michaels really anti-low-carb, or is something else going on here?

Realize that Jillian came up through a major TV network — part of the mainstream media, who serve as the propaganda arm for the establishment above. And remember that this isn’t Jillian’s first attack on keto – they also wheeled her on out for the Steve Harvey show, where she displayed a similar aptitude in a failed attempt to re-program the housewives who were at home watching.

Understand this: they’re not going to invite someone onto their mass-market television show who’s not going to stick to the script. As people are getting off of their blood sugar, psoriasis, and other medications, the advertisers are not only losing money, they’re losing power and control. Jillian is just one of their many weapons – there will be many more in the future, and they won’t all be on TV or YouTube.

What’s funny is that we’ve actually already solved the obesity crisis. The formula is out there — and here’s a hint — it doesn’t actually require constant ketosis, although keto is a great tool to use. The message is out there and it’s getting louder. So what does the establishment do? They try to overwhelm that message.

They will try, but they will fail. All because they always underestimated how powerful the Internet would be. As the truth-seekers have collaborated online and glued the centuries-old research together, we’re realizing the truth. I have been on the internet since 1996. I was a teenager at the time. Remember, this was supposed to be just “a fad”. They had no clue how big it would become. That was the establishment’s fatal moment.

They can try to corral us into their walled gardens of Facebook and Google, and they’ll do a good job for many, but as long as we still have our first amendment rights, they will not win. Because people are sick and tired of feeling sick and tired, and there is no greater motivator than feeling great.

Now, I could sit here and remind Jillian that her subjects on The Biggest Loser were actually in ketosis a majority of the time, but she already knows that. Ironically, the way she put them into ketosis is closer to the “emergency state” she talks about compared to anything our community ever advocates. But she too knows that.

You see, Jillian, I know. I know that you’re smarter than the online community takes you for, and I know that you don’t believe what you’re saying. I see it in your sad, puppy-dog eyes. In fact, most of the stuff you said in your video was actually pro-keto, you just said it with a negative tone and a frown on your face. You’re a good actress, but I actually watched the video and can read between your lines.

So given that I believe you’re smarter than the diet community takes you for, at this point, I consider two possibilities:

So here is my offer to you, Jillian. It’s early 2019. This year, I am giving you your “get out of jail free” pass. Come out and be truthful about the low-carb, high-fat lifestyle and its benefits. Take a dozen of your worst-failing clients where calorie-counting and “balanced diets” don’t work, try something different with them, and document their success.

If you need help, I’ll give you five names to reach out to:

These men all have different backgrounds and specialties, and they all have different spins, so it’s not the same thing over and over. Dr. Tro is an extra-special case, since he was actually obese himself, and took it upon himself to figure it out.

After that, you will have a lot of work to do. Your workouts are great as is, but you’ll need to shift your diet strategy. You’ll need to eat some crow. And you’ll lose some short-term money. But long term, you’ll be on the right side of history, and you’ll actually be fighting for good instead of evil this time around. And once you really understand the problem, and understand that keto is not the only solution, you’ll actually be able to make twice the money, minus, of course, the establishment shilling fees.

But if are are indeed compromised, when your captors unfortunately release whatever it is they have on you, we will forgive you. But only this year. After that, the gloves have to stay off.

So join us, Jillian. It’s 2019 and you’re fighting a losing battle. Come be truthful and you’ll have more success and less egg on your face than even you had ever imagined.