“Tomorrow, I start the keto diet!” 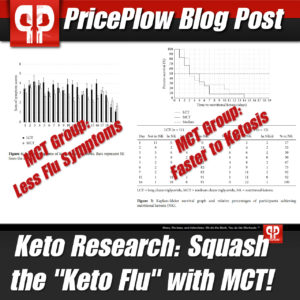 With a hint of pre-emptive triumph, this affirmation is stated millions of times each year. The reason tomorrow always seems to win over today: dieting is generally regarded as a time of deprivation, restriction and a healthy reduction in one’s gastronomic indulgence.

While it is a champion at destroying appetite, the Very Low Carbohydrate Ketogenic Diet (VLCKD) is notorious for an initiation period that can lead to symptoms dubbed the “Keto-Flu.” In years past you either suffered through it or bailed on the diet altogether.

Cliff J. d C. Harvey and colleagues at AUT University in Auckland, New Zealand may have a third choice for keto dieters, and it’s something the low-carb community is already familiar with. With their recently published research, “The Effect of Medium Chain Triglycerides on Time to Nutritional Ketosis and Symptoms of Keto-Induction in Healthy Adults: A Randomised Controlled Clinical Trial,”[1] Harvey and company have given ketogenic dieters the research to support MCT use in order to reduce keto-flu symptoms and decrease time taken to reach nutritional ketosis (NK).

Before we dig in to the details, you can see some MCT Oil Supplements on PricePlow and sign up for our MCT news and price alerts below:

Fat in the Pursuit of Fat loss

Very-low-carbohydrate ketogenic diets offer specific health benefits for those suffering from certain diseases, such as neurological disorders, diabetes, cancer, obesity, and other metabolic conditions.[2-11,13] Research supports the effectiveness of ketogenic dieting and some individuals simply feel better with such a diet when compared to a low-fat reduced calorie program.[18] 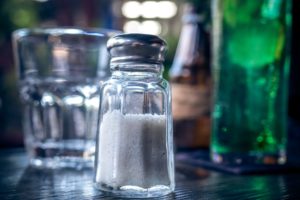 There’s a white grainy molecule that causes a ton of health problems… but it’s not this one! It’s sugar, not salt/sodium. We’re pro-sodium, especially in keto transition

But one of the major drawbacks to a VLCKD is the induction period. During this period the body transitions from using primarily glucose and stored muscle and liver glycogen to using fats and ultimately ketones as its primary fuel source. During the induction/transition period, the infamous “keto-flu” may hit dieters, potentially derailing success before they even get started.

Keto-flu manifests with symptoms such as constipation, headache, halitosis(bad breath), muscle cramps, diarrhea, general weakness, and rash.[12] Keto-flu is a result of increased natriuresis (excreting sodium), kaliuresis (excreting potassium), and diuresis (increased peeing). This is why we suggest both increased sodium and potassium on the keto diet.

While ketone production and utilization is getting ramped up, the reductions in blood glucose during the adaptation period can also result in a temporary shortage of fuel for brain function, and thus a feeling of mental dullness with lack of clarity. The severity of the aforementioned symptoms vary from person to person, but almost everyone experiences some degree of effects during the adaptation period of the ketogenic diet.

“The aim of the present study, therefore, was to investigate, in a randomized, double-blind, placebo-controlled trial, whether MCTs reduce time to nutritional ketosis and symptoms of keto-induction and mood in a classic ketogenic diet. The primary outcome measured was the time taken to achieve NK. Secondary outcomes were symptoms and mood.”[1]

The researchers recruited participants as shown in table 1 below.

Once recruited and divided, the study participants were placed on a VLCKD with a 4:1 lipid to non-lipid ratio. Females were allowed 1800 kcal per day while the men received 2200 kcal per day. Both the men and women consumed 80% of their daily calories from fat, which included the supplemental oils. The remainder of calories were allocated as 13-17% protein and 3-6% from carbohydrates.[11] 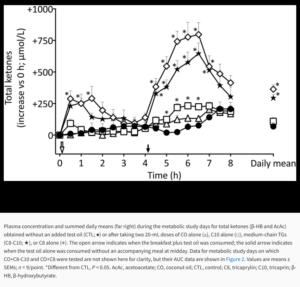 C8 MCT Oil does some amazing things compared to the other fatty acid chains over the next few hours![19]

Participants were randomly assigned to receive either MCT oil (comprised of 65% caprylic acid [C:8] and 35% capric [C:10]) or sunflower oil. Both oils were dosed at 30g three times per day for 20 days. Yes, this is a very large and relatively pricey dosage. The researchers arrived at this dose based on a previous study performed by Ivy et al. in which they discovered 100% of participants experience gastric distress with dosages of 50 and 60g of MCT, with only a small GI effect noted at 30g.[14] (Note that this is true for the higher-cost C8/C10 MCT oil mixtures… other MCT mixes may not afford such ease.)

Participants were instructed to measure their beta-hydroxybutyrate (BOHB) and blood glucose (BG) levels upon awakening. They were furnished a “FreeStyle Neo” blood-prick ketometer/glucometer (Abbott Industries) in order to perform said tests. For the purpose of this study, the researchers choose a blood level of ≥0.5 mmol·L−1 BOHB to determine a participant having reached a state of ketosis, which is the general consensus. In addition to blood tests, volunteers also completed a symptom questionnaire as well as a mood evaluation.[1]

“Supplementing MCT resulted in consistently higher blood levels of BOHB in our cohort of healthy adults relative to LCT treatment, with higher BOHB at all time points in the MCT group (Figure 2).”[1]

“There was also a very likely negative effect of BOHB on glucose in both groups. That is, higher BOHB levels resulted in lower glucose levels. This was further indicated by a very large, significant, inverse relationship of glucose to BOHB for both MCT and LCT groups”[1] 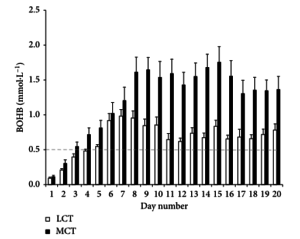 Ok, so we see higher blood levels of BOHB with lower levels of blood glucose using MCTs, but this is always the result of a keto diet right? So why use MCTs at all?

It all comes back to the potentially troublesome induction period with the dreaded keto-flu. Do MCTs help us endure the keto-flu or perhaps even shorten it all together? The results and data are encouraging: 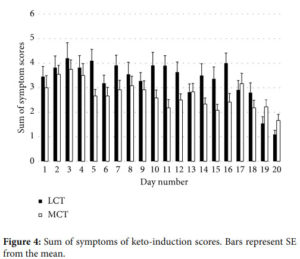 Possibly by jump-starting your body into ketosis faster, MCT users had less flu symptoms in those first two weeks!

By day three, the initial advantage MCT had shown in hastening nutritional ketosis ceased to continue. From day three on participants entered ketosis at the same rate. It should be noted that the MCT group saw 100% of its members reach ketosis while the LCT group had one person unable to obtain ketosis at the end of day twenty. So when it comes to reaching ketosis there may not be a statistically significant advantage after a few days… but…

The MCT group had 17% of its members in nutritional ketosis by DAY ONE vs 0% for LCT! On day two MCT had 33% of users in nutritional ketosis vs 18% for LCT. So if one uses MCT during the first two days of a VLCKD there is up to a 33% chance you will be in ketosis (so long as you’re not a carb-abusing bonehead). Anyone who has dieted can appreciate the difference one or two days less of suffering would make. One or two days may be the difference between a successful induction period or abandoning the VLCKD altogether. 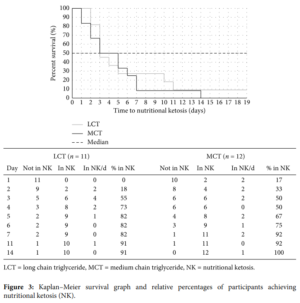 This is the chart that makes the study. Look how fast MCT users got into ketosis!!

MCT oil is generally regarded as safe and ketogenic.[15-17] There is a clear and significant effect on BOHB levels when MCT supplementation is compared to LCT consumption.[1] While there was not a significant effect on time to ketosis with MCT vs LCT, certain participants were able to achieve a state of ketosis two whole days earlier with MCTs.

Two days can be a lifetime when dealing with brain fog, cramping, bad breath and general weakness, aka the keto-flu. Simply put, when subjecting one’s self to voluntary suffering two days may be the difference between success and failure. So while you fill your plate with the holy trinity of keto (beef, butter, and bacon), strong consideration should be given to the inclusion of MCTs in your fat feast – at least early on!

Be sure to check out the hottest current deals on MCT oils and avoid the dreaded keto-flu!