Does it assist with weight loss? Maybe, but this study proves nothing. Read why below.

This week, a new research study is trending, with article titles such as Clinical trial reaffirms diet beverages play positive role in weight loss.[1] This study came out of the University of Colorado’s Denver medical campus.[2]

The TL;DR they want you to read

These stories provide the following bits of information:

Sounds great, but how do you control this? The article doesn’t mention, so you have to dig deeper.

The real study data you need to read

All studies are flawed to some extent. We simply can’t take identical twins and put them in cages and perform tests on them. Maybe that flies in North Korea, but not here in civilian America.

So the biggest problem with any weight loss study is setting a control group. It’s the first thing we look for.

Reading the actual study[3], and not just the abstract, we learn a bit more.

In this case, the participants were all in a year-long weight loss program, which consists of a 12 week weight loss phase followed by 9 months of maintenance. They were all given weekly group meetings and were instructed on weight loss strategies.

That’s not bad, but it’s still not controlled. All other things are not equal.

But it gets worse – there’s one serious gaping flaw. Pasted from the study:

Participants randomized to the water group were asked to consume at least 24 fluid ounces of water per day, and not drink any NNS beverages. They could, however, eat foods that contained NNS (examples: artificially sweetened yogurt, gum, candies, cookies, ice cream, gelatin, pudding), but could not intentionally add NNS (examples: aspartame—NutraSweet or Equal, sucralose—Splenda, stevia—Truvia; as well as diet creamers) to beverages such as coffee.

Participants were given manufacturers coupons weekly (from the three largest beverage manufacturers: The Coca-Cola Company, PepsiCo and Dr Pepper Snapple Group), redeemable for bottled water or NNS beverages at retail stores. Participants were asked to record their beverage intake daily, and this information was used to assess treatment adherence.[3]

So basically, here’s what they’re doing:

Seriously, what in the hell did you expect to happen? We’re surprised these subjects lost any weight at all! 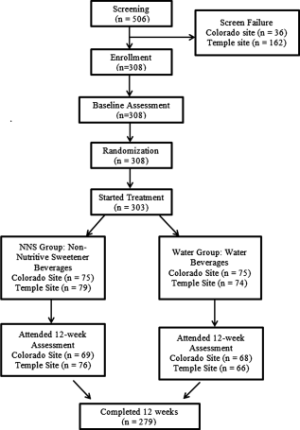 How the Research was Screened

To summarize the situation, one side of the study gets roughly ~150mg caffeine (24oz of diet soda, and they can keep their coffee sweetened), while the “control group” cannot.

Caffeine consumption is unlikely to stop

Let me tell you something about caffeine-drinkers: They’re not all just going to stop drinking it while dieting — they’ll find it elsewhere. High amongst the options are to add caloric sweeteners and dairy to your coffee, or drink soda that has sugar in it.

But in the case that they did give up all coffee/caffeine, that upsets another control variable — the fact that caffeine is thermogenic and assists with lipid turnover and weight loss.[4] Not to a massive degree, but it does.

The conclusion and lessons learned here

First, allow us to say that we’re not claiming there are no benefits to drinking diet sodas while dieting. We’re not agreeing with either side here. If it works for you, then by all means, go for it.

What we are saying is,

Which leads us to our next point:

Why do these articles and this study all read like sales pitches?

Guess who “supported” the research? The ABA – American Beverage Association. See for yourself in the study itself[3]:

Funding Agencies: The study was fully funded by The American Beverage Association.

We rest our case.