It looks like decades of death, deceit, and damage done by Ancel Keys, D. Mark Hegsted, Fredrick J. Stare, and the sugar lobby will slowly come to an end as the real truth behind Western metabolic disorders continues to unfold. 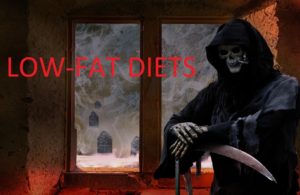 A massive new study out of Canada shows that in fact low-fat diets may be the reason for increased mortality, not high-fat diets like once thought.

Low-fat diets were once promoted as the beacon of health and the key to successful weight loss for decades by fitness professionals, registered dietitians, and even members of the medical community. It was once thought that consuming fat is what made us fat and led to atherosclerosis, heart disease, and a premature date with the Grim Reaper.

Unfortunately, much of that data was based upon fraudulent research paid for by the sugar lobby (Hegsted and Stare),[5] or selective data that was selectively cherry-picked in order to support low-fat diets (Keys).[6,7]

And now new research is backing up the truth: low-fat diets are more deadly than their high-fat, Mediterranean counterparts.

A monstrous new study gives some strong evidence that it’s not fat sending us to an early grave, but lack of fat in the diet. New research out of Canada suggests that consuming a low-fat diet can increase your risk of an early death up to 28% compared to eating a more moderate fat diet. 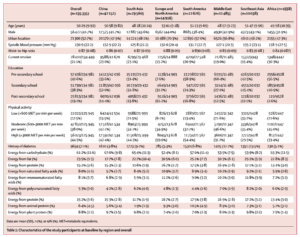 The Prospective Urban Rural Epidemiology (PURE) study was an expansive, epidemiological cohort study of 135,000+ individuals in 18 countries between the ages of 35–70 years with a median follow-up of 7·4 years.[1] Researchers collected data on the dietary intake of the individuals using validated food frequency questionnaires.

Subjects were grouped into quintiles (divided into fifths) of macro intake (protein, carbs, and fats) based on the percentage of energy provided by the nutrients. Researchers were primarily interested in documenting links between diet and total mortality as well as major cardiovascular events, including: 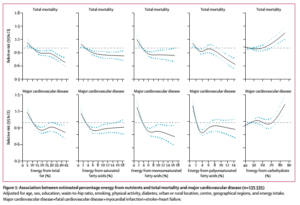 During the follow-up, researchers documented 5,796 deaths and 4,784 major cardiovascular disease events. As it turns out, it wasn’t the high fat diets that were associated with an increased risk of mortality, but rather those with a higher carbohydrate intake (i.e. low fat intake).

“A decrease in fat intake automatically led to an increase in carbohydrate consumption and our findings may explain why certain populations such as South Asians, who do not consume much fat but consume a lot of carbohydrates, have higher mortality rates.”

Those who understood how Ancel Keys’ “Seven Countries Study” was cherry-picked know the drill – South Asia would be an area that low-fat researchers simply choose to “ignore”. But it turns out those high-fat diets — especially those that are fish-based — are quite healthy.

Downplaying their achievements (for personal safety?)

While the results may seem damning for low-fat dieters and a win for the keto, paleo, and Atkins crowds out there, one of the other researchers on the team, Dr. Andrew Mente attempted to downplay the results and put in perspective:

“The effects are modest effects, in the neighborhood of a 20% reduction in relative risk. So if the annual [absolute] risk of mortality is 1%, it would be reduced to 0.8%. At the individual level, it is tiny. And nowhere near what you find for smoking and lung cancer — about 200 times smaller in fact

“Dietary exposures in general have modest effects on clinical outcomes. Even in the PREDIMED trial in 2013, where they evaluated an entire dietary pattern, and presumably an additive effect of multiple foods, they found a 30% reduction in risk. So you might imagine how modest the effect for individual foods would be. Typically most foods or nutrients are associated with about a 10% change in relative risk. Small.”

It’s reasonable for Dr. Mente to be fearful of the information he is unleashing — he is in the process of reversing decades of dangerous propaganda, and billions of dollars have been made by corporations who lobbied for the opposite of what this study is showing. Very powerful and dangerous people will be very angry with his data – but under no circumstances is a 20% reduction in relative risk a minor thing or even modest thing. 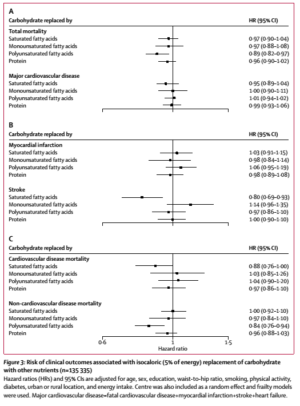 Impact on mortality and major CVD events when carbs are replaced with other nutrients.[1]

The same team of researchers also published two other papers in line with the massive diet analysis and the results are interesting to say the least. The second paper from the PURE study assessed fruit, vegetable and legume intake and its impact on mortality, heart disease and stroke.

The team observed that the lowest risk of death were in people consuming three to four servings (approximately 375 to 500 grams) of fruits, vegetables and legumes per day.[2] They also noted that there was little added benefit for consuming over that amount, which stands in opposition to current recommended intake of produce that recommends 5-9 servings per day (which could ultimately lead to an overconsumption of sugar and not enough protein or essential fats).

The third paper from the team investigated the impact of fats and carbohydrates on blood lipids and blood pressure.[3] Researchers noted that LDL (“bad” cholesterol) isn’t reliable in predicting the effects of saturated fat intake on future cardiovascular events. Rather, the the ratio of Apolipoprotein B (ApoB) and Apolipoprotein A1 (ApoA1) provide a superior method for predicting the impact of saturated fat on cardiovascular risk.

Notice the lower hazard ratio scoring for diets higher in fat and lower in carbs.

So, what kind of diet should you undertake if you’re looking to stave off death and disease?

According to the PURE researchers, based upon the data they currently have, “The best diets will include a balance of carbohydrates and fats – approximately 50-55% carbohydrates and around 35% total fat, including both saturated and unsaturated fats.” So as the trendline moves back to sanity, where does the real truth lie?

Either way, with such a diet as recommended, you don’t have to go full bore one way or the other like low-fat diets or keto dieters. While we’re becoming more and more enthusiastic about the keto diet for multiple reasons, but it may not be truly necessary for everyone. However, at this point, to not be on at least a Mediterranean Diet that’s high in fatty fish is nearing insanity.

So now you can meet somewhere in the middle – but closer to the high-fat side of things, which harkens back to the old saying…  everything in moderation.