Autism Cause THEORY: Is the Increase in Autism from SEED Oils?

June 19, 2018
Disclaimer: The following article is an untested theory based upon a small amount of research involving correlational data.

I’m not expanding on this idea, as it is not my fight to fight, but I wanted to publish the article and video to put the theory out into the “Internet ether”, since I believe it to be closer to the truth than any other theory, and I know many unfortunate individuals are out there looking for answers when none others have sufficed.

Is the alarming rise of autism in Westernized societies caused by industrialized processed seed oils?

Several nights ago, I was awoken and knew that I wasn’t going back to sleep. I jumped onto Twitter, where I follow many diet researchers, most of them low-carb advocates. Occasionally, discussions regarding dietary modifications for autistic children arise, which inevitably leads to debates regarding vaccines.

In this case, the comment on my feed that came up is shown below:

This is interesting. Finally a theory that makes sense. Question is what causes all this inflammation? Is it the mother's diet?

I was curious what he was replying to — it turns out to be in response to the short YouTube video below, which is a theory by Dr. Suzanne Humphries, MD, who states that “it’s undeniable that autism rates spiked when the CDC’s vaccination schedule aggressively expanded”, but her theory is a bit more nuanced (don’t worry it’s a quick video):

Dr. Humphries claims that it’s not vaccines causing these problems alone. She also states that those who are “vaccine injured” often follow similar patterns (roughly 98% of the time, at least):

Maybe… maybe not — I have no experience or expertise in this matter.

Dr. Humphries is missing something big in the above video…..

But like most who engage in the ongoing “Low Carb vs. Low Fat” diet debates, Dr. Humphries misses what I believe to be the most crucial part of this – the thing that causes the most inflammation in the first place!

This is essentially what Peter Faber asks in his Tweet:

Question is what causes all this inflammation?

I’ll tell you what:

To answer his question, it’s the industrialized processed seed oils. Particularly those heavy in omega-6 polyunsaturated fatty acids, specifically with high amounts of linoleic acid. Often called “vegetable oils”, these are anything but that. I’m talking about the following:

If you are someone who values your health — or the health of your family — you will avoid these oils like the plague.

The very oils that are literally everywhere in our food supply. The more I research diet, the more I realize that these are our real killers.

The true cause of our ongoing metabolic / diabetes / obesity crisis

Here’s a simple truth: you cannot find an ongoing metabolic and obesity crisis without these oils. Introduce them into any society and any population, and literally everything goes wrong. Move healthy, “primal” populations into areas with these oils, and the same thing happens. Remove those individuals, and they get better. Every single time.

Don’t blame all carbs for what the seed oils caused. They’re working together to kill you.

To make an analogy, refined carbs are the ignition, as they spike your blood sugar levels and insulin, setting the stage for trouble (and causing a bit of their own trouble in the process). But these toxic oils are the explosive thermite. They are insanely inflammatory, they drive food addiction, and they are nearly impossible to avoid if you don’t cook your own food.

And it turns out that both refined carbs and these nasty seed oils are in nearly all of our processed foods.

But what’s this have to do with autism? 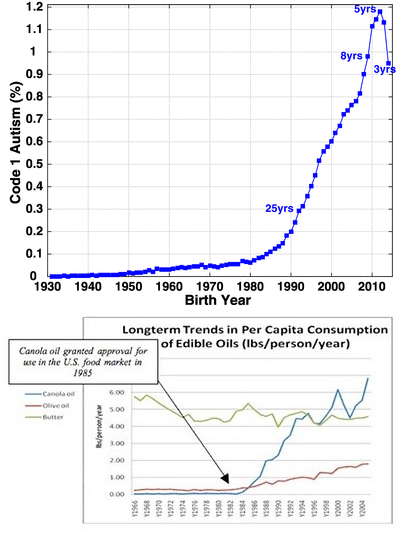 Since the introduction of Canola Oil in 1985, literally nothing has gone right for us. That includes exploding rates of autism. Is there a connection? I believe there is.

Admittedly, I do not have a source for the bottom chart, but it seems about right. Look at what happened once canola oil was approved and its usage increased. Skyrocketing autism rates.

Yes, this is correlational, but in a general sense, the mechanisms makes sense. I put the idea to the test, tagging one of the world’s experts on seed oils, Tucker Goodrich (Tucker’s blog):

Did I just stumble on to something here? @TuckerGoodrich?

Compare the approval and usage of canola oil with the skyrocketing #autism rates in the US.https://t.co/f23RjBwVOq#lcl6 #CanolaOil pic.twitter.com/Zkqm1WmCC9

Tucker responded that “It’s plausible. OxStr [oxidative stress] is a factor in autism.”[1]

Regarding autism, I offer no further argument beyond this. I’m merely showing you something that’s strongly curious, and if you’re looking for another point of view, this is the one to chase.

Stay away from seed oils!

What I do know is this: these processed seed oils are bad news. Very bad news. And not enough people are talking about them.

If you are someone who values your health — or the health of your family — you will avoid these oils like the plague.

And due to the fact that they are literally everywhere, from restaurants to all of the undefined “processed food” we discuss, this means you’re going to be cooking a whole lot. Preferably with animal fats like beef tallow and butter, as I am not sure we can even trust the “fruit oils” such as olive oil and avocado oil, given that they’re oftentimes spiked with these nasty seed oils more than anyone wants to admit. 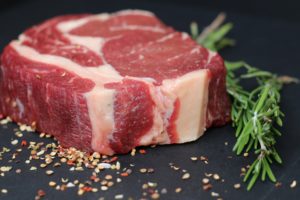 Red Meat is back on the menu, folks! Just don’t mix it with those disgusting seed oils (or starchy carbs if you haven’t trained like a beast today)

Over the coming years, I hope to join in the battle in bringing back an ancestral-friendly, species-appropriate diet rich in fish, eggs, and red meat. Sometimes this diet has carbs, sometimes it does not. But one thing no healthy diet ever has are these putrid, easily-spoiled, highly inflammatory industrialized processed seed oils. Just stay away from them.

Low-Fat vs. Low-Carb Diets? We can take from the best of both

Back to my ignition / thermite analogy, perhaps we shouldn’t be blaming the igniter so much for what the bomb did. Because that’s what low-carb advocates do far too often (by blaming sugar), and if there’s one awesome benefit to a good low-fat diet, it’s the inherent removal of these disgusting “oils”.

But we can have a “best of both worlds” scenario, where we eliminate both processed carbs and processed seed oils, using the real food mentioned above. And it turns out, this is where people are having the greatest dietary success.

As for the autism connection, I leave it to someone else to do the deep dive. While I’m confident that my theory is right, I just don’t have the time to go any further with this. Take the ball and run with it — the more you learn about these oils and their mechanisms (look into 4-HNE), the more you will be astonished with their hazards.

Good luck to you and your families.

Additional Note: This blog post was moved from my business website. In addition, I made a video sharing essentially the same thing, but took down. I’m happy to re-share that video but will eventually re-make it with a touch more research and put it onto my personal channel.